Which is the more balanced, diverse and experienced ticket ?

1. The McCain-Palin ticket offers 66 years of public service experience, against 46 years from Obama-Biden, BUT 39 of those are in only ONE organ, the US Senate.
Insiders ?

2. Obama-Biden offers NO executive experience whatsoever - at any level.

3. McCain, as a Navy Commander, was XO and then CO of a US Navy Squadron, after his release from Vietnam, while most of Palin's experience, 9 years, has been executive - at City, quasi-judicial [ Alaska Oil and Gas Commissiom ] and at State Governor levels.

4. McCain has 53 years public service [ 27 in uniform and 26 elected ] which is 6 years longer than Obama has been alive.

5. McCain has 26 years elected at Federal level, [ plus Senate involvement as a Navy Capt while serving as US Navy liaison ] but Obama has only 4 years at that level.

Any doubt which ticket is the more diverse, balanced as well as experienced one ?
And which is the narrow, conventional, insider ticket ?

But even more crucial to my mind is that Palin and McCain always talk of VICTORY in Iraq [ over Jihadi beheaders and mosque-bombers ], but Obama talks of WITHDRAWL [be it with or without victory ].
Imagine FDR in June, 1944, as brave Americans liberated Nazi-occupied Europe, talking of withdrawl, instead of victory - Obama and the rest of his neo-Dem ilk, betray the honorable past of their own Democratic Party, as well as the long and ongoing record of US freedom-fighters, and the brave peoples of Iraq.
Can Obama naively imagine that if the Jihadis are allowed to win, and the Tigris River runs red with innocent Iraqi blood, like Cambodia was when the Khmer Rouge took over in 1975, and made TUOL SLENG their Auschwitz, that this is tolerable, or even that the Jihadis will stop there ?
Or does he really care ?
Or will Obama be smugly satisfied just as long as innocent Iraqi blood will never pollute San Francisco Bay, or the Hudson ?
Can HIS America really be The Land of the Free and the Home of the Brave ?
Did he ever learn that, from the Tigris to the Hudson, we are Free only because of the Brave ?
Posted by Tom Carew at 06:29 No comments: 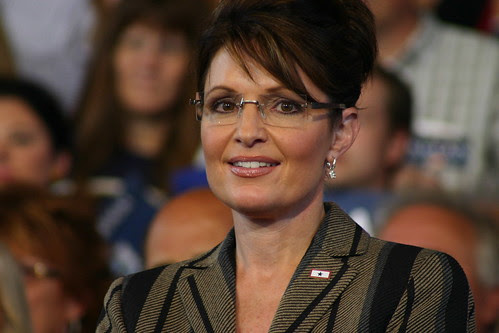 Sarah Palin, originally uploaded by Larsenphotography.
Posted by Tom Carew at 16:30 No comments: 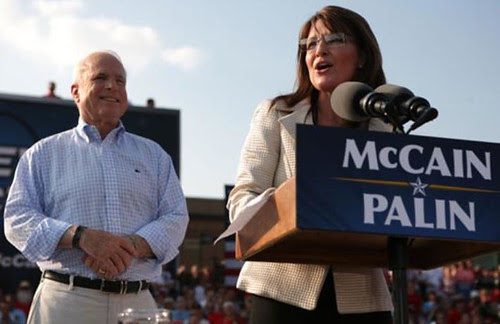 PalinVP3, originally uploaded by captainleadbottom.
Posted by Tom Carew at 09:42 No comments: 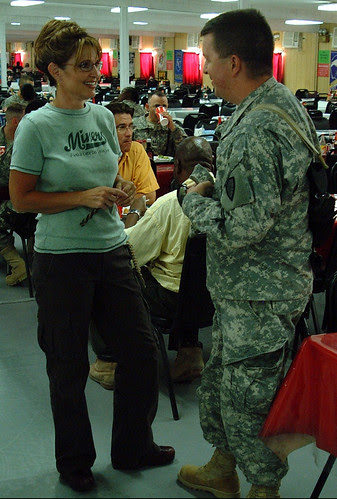 TAMCEL is the new acronym I have now coined to refer to the clique whose fury against the Governor of Alaska, Sarah Palin, daily reaches new levels of vitriolic outrage, and personal attacks.

The perfect example of this TAMCEL mentality is Obama himself, when, speaking in San Francisco to some of his very wealthy funders, he sneered at those poor folk in **small towns** who are **bitter** and **cling to their guns and their religion**.

David Brooks in the Internation Herald Tribune Wed Sept 10, 2008, p 13, mentioned **comedian** Bill Maher refering to Sarah as **a stewardess**, and Brooks placed Maher among what he called **the Coastal Condescenders** - a useful and timely reminder that the arrogant POKEDS
[ Pelosi-Obama-Kerry-Edwards-Dean-Soros ] neo-Democrats are guaranteed to lose yet again if they continue to confine their values to the narrow coastal belt, on both oceans. That very thin Blue strip is ideologically and culturally virtually part of Greater Canada, in contrast to the Red heartland of Inner America [Greater Texas ], where this Presidential Election will again be lost - by the neo-Dems.

That condescending mentality, and its takeover within the Democratic Party, is the reason why Reagan, a former Trade Union President, became a Republican, and won [and retained ] the support of the Reagan Democrats, and the reason why Joe Lieberman was re-elected as an Independent to the Senate, and why he now strongly supports McCain-Palin. The rather thinly-veiled contempt of POKEDS neo-Dems, and above all of Obama himself, for the historic blue-collar base of the Democrats, and especially for their values, is noticed by those like the **Fire-fighters for Lieberman** whose yellow placards surrounded Joe on the night of his re-election. The funding of his multi-millionaire official Democratic opponent, Ned Lamont, by multi-billionaire George Soros, was to no avail. And the funds and celebrities of Hollywood, like Susan Sarandon, or the incredibly biased media, like CNN or CBS, and above all the NY Times, will again be of little avail - against solid American [ and indeed universally valid ] values.

It is significant that the very same kind of contempt was revealed by Senator John Forbes Kerry [1943-] in his sneering remarks, Oct 30, 2006, Pasadena City College, CA, when supporting former CA State Treasurer Phil Nicholas Angelides [1953-] for CA Governor, who was later massively defeated by Arnie. Kerry remarked that **You know, education, if you make the most of it, if you study hard, and do your homework, and you make an effort to be smart, you can do well.
If you dont, you get stuck in Iraq**.
In fact, only 13.7% of US Army recruits in 2005 were from the 20% poorest neighborhoods.

And Obama is not original in his sneer about folk **clinging to guns and religion**, as KARL MARX wrote of religion as **the opium of the people**. The many dubious influences on Obama do not begin with Rev Jeremiah **Not God Bless but God Damn America** Wright, or convicted fraudster, Syrian-born Tony Rezko, or the Chicago guru of ** community organizing** agitation, Saul David Alinsky [ author of **Rules for Radicals** ].

POKEDS preach non-stop about their sacred mantra, of Diversity, Pluralism, Tolerance, but that extends only to those who are within their Inner Circle, or are chosen to be patronized by their support, like LGBTG folk, but never to those they deem to be inferior Rednecks. And although **the Democratic Party has almost cornered the market on the beautiful people and the hipsters**, with relentless Convention **hype about America's misery**, they have gradually cast the old Democratic Party into, as Jonah Goldberg [ **Liberal Fascism**] put it in USA Today on Wed Sept 10, 2009, **the party for the losers in society**, while leaving the Republicans to exude Reaganite optimism, celebrate the prosperity that comes from open global markets, and aim their message at Winners - winning also in victory over Jihadi beheaders in Iraq as well as standing for upward socio-economic mobility at home. Yet for Michelle Obama, the troops are now desparately in need of **mental health care**, but for the GOP, they are heroes in pursuit of victory. The neo-Dems have **lost their Rooseveltian optimism, to the point where they're the Downer Party**.

Enough Democrats will follow Joe Lieberman to send a very clear message to TAMCEL and POKEDS this November. And very much thanks to the ill-concealed contempt by the left-liberal elite for ordinary decent Americans, and their values. America, to its own people as well as to the wider world, stands for winning and optimism, not for victimhood and complaint, or else it means nothing at all. This is the deepest **pro-life** spirit which the energetic, warm, and confident Palin oozes, and which the hero McCain embodies. No contest.
And as a proud Irishman, I am delighed that John McCain's VP will be Irish, for Sarah is a daughter of Sally SHEERAN, and her late uncle was Col Patrick Sheeran, a Texas lawyer.
Posted by Tom Carew at 07:28 2 comments: