The youngest AFL-CIO officer ever [ at 39 ] and their first woman officer, points put that women organized in unions earn on average 30% more.

A forward-looking US perspective, from the first woman to reach the No 2 slot in the 11.5m, 57 union AFL-CIO, the national confederation of trade unions, on the challenges facing unions, in a world where, post-Enron and post-Lehman, Main Street cannot rely on Wall Street to even behave rationally, much less look after Main Street, if unchallenged or totally unregulated, but where workers also must grasp that their own future depends on profitable business.
If a well-ordered state needs real *separation of powers*, with strong, principled but separate Judicial, Legislative and Executive roles, so also does a well-ordered economy need strong, coherent but separate Entrepeneurial, Worker and Regulatory forces.

A balanced, probing and honest report, from a former actor, unlike that produced by too many *professional* with their own bias and agenda. 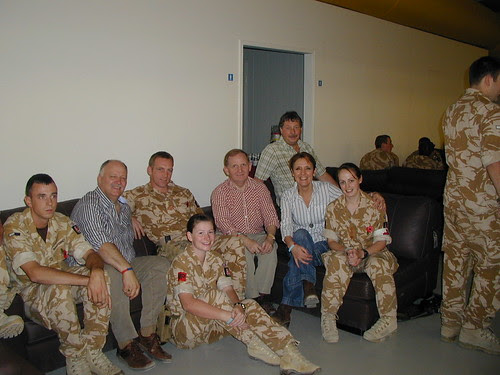 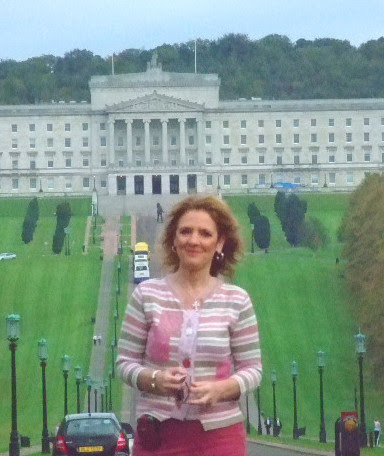 Iris Robinson in Iraq, originally uploaded by DUP Photos.
Posted by Tom Carew at 11:25 No comments:

She never exploded car-bombs, or kidnapped, tortured, maimed or murdered either her neighbors or police officers.
And she never murdered elected politicians.
She never ran any protection racket.
Or smuggled.
Or forged bank-notes.
Or crippled alleged petty criminals, or opponents.

Those who did all that - and more - are now guaranteed Cabinet seats in Ulster.

She never raped alter-boys.
She never covered-up the crimes of such child-rapists.
She never saw such crime commited by colleagues, but remaind silent.
Those who did are not demonised any more than she has been - altho they are ordained churchmen.

She has been a Councillor and Mayor, a Member of the Northern Ireland Assembly, and a UK MP. But has never been proven to make any corrupt decisions in any of those elected roles. Or even charged with such crime. Or with any crime. Or suspected of any crime.

She did however publicly and trenchantly express her vehement personal conviction, speaking on BBC Radio Ulster and in UK Parliament, based on her belief in both the Hebrew and Christian Scriptures, that homosexual activity is completely abhorrent. She quoted the usual English translation of a term in the Hebrew Torah - *an abomination* - as her own passionate conviction about such activity. A view also shared by the Quran.

She has now been revealed, by BBC TV in Ulster, to have become sexually involved with a young man, then 19, when she was 59 and married, to the PM [ *First Minister* ] in Ulster - as she still is. She is now 60. The involvement lasted for some months. She helped him to start a new business, a small cafe, employing both himself and others, which is succeeding. This happened soon after his father had died, after a long illness, with cancer. She persuaded 2 very wealthy builders/developers, to provide £25,000 each to fund that new business venture.
She failed toregister, as an elected representative, the receipt of this cash, as current regulations now require. She also did not disclose any involvement with the business when her local Council granted her young friend a lease on the cafe premises.

Major offences ?
Sinister intent ?
Even for an elected politician ?

She has been revealed to be a long-term sufferer from severe depression, to have suffered Post-Natal Depression when her first child was born [ nearly 40 years ago ], and also suffered depression after a Hysterectomy at 34. She attempted suicide last year, around the time her husband discovered her extra-marital liaison, which had then ceased, and has announced her resignation from politics, due to mental health. She expressed deep regret for her conduct in a written statement. Newspapers have now carried allegation she had 2 previous liaisons.

She is said to be under *acute psychiatric care* at present, but it is not clear whether any current mental health crisis for her is due to the manner or fact of the BBC investigation.

Would she really be treated the same way if she was male ?
Or if she had expressed more liberal views on homosexuality ?
Other *offences* may include being very good-looking, well-groomed, vibrant and sensitive. Not to mention impetuous or adventurous or vulnerable.
One commentator, who knows him well, described her husband, Peter, as *having ice in his veins* - the common judgment in the Province. He also called a Press Conference, just BEFORE the TV exposure, and he *forgave* Iris, who was *repentant*. And he was able, on the morning after her midnight suicicde-attempt, to leave her [ allegedly in the care of family ] and to speak in the Assembly.
She also managed to be a successful mother for her 2 sons and a daughter.

The sensational TV exposure was based on 150 SMS [ text ] messages very carefully preserved by her political adviser, a grim, one-time Air Force Methodist Chaplain, Dr. Selwn Black, who does not seem to have ever confronted Iris, or her husband, about any reservations he may have had, while employed by her. Why did he never raise any issues ?

The complications of the psyche, of sexual involvement, of human motivation, not to mention marital dynamics - are many and deep - but considering this tragic case, and the demonising of this vulnerable and now isolated woman, who are the real criminals in Ulster ?
The unrepentant, blood-soaked gangsters who now rejoice in their *respectable* political status, but who never sought forgiveness for their serial, mass murder, or returned any of the cash they robbed, or a troubled, impetuous and elegant woman, who never maimed or slaughtered as much as 1 of her neighbors ?
And who may have *loved not wisely but too well*.

Formerly in the British Labour Party, notorious for his uncritical admiration for the Iraqi tyrant, and mass murderer, Saddam Hussein, now aligned with radical Islamicist and hard-left elements in his so-called *Respect Party*, which has only 1 MP, George.