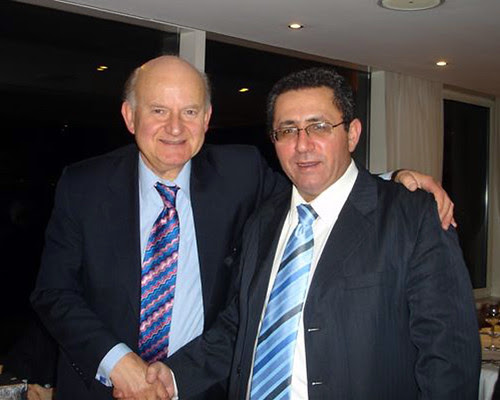 OFER EINI , Chair of the Israeli trade union federation, Histadrut [ whose members are 10% Arab ] is both a Vice-President of the global trade union body, ITUC, with 176m workers in 156 lands, and also one of 25 elected to its Executive board and one of 70 on its General Council.
ITUC at its June 2010 Vancouver second World Congress firmly supported co-operation, not boycott, as the only way forward, for Israelis and Palestinians, both as trade unionists and as neighbors in the Middle East. A clear policy position utterly repudiating the fanatical fringe who aim to demonise Israel.

No Dogs and Israelis

Why the Irish Support Palestine - By Rory Miller | Foreign Policy

Good analysis by a London-based Dubliner Why the Irish Support Palestine - By Rory Miller | Foreign Policy
Posted by Tom Carew at 05:06 No comments:

Hamas and Its Enablers

David Pryce-Jones on the irresponsible, naive Jihadi groupies Hamas and Its Enablers
Posted by Tom Carew at 05:53 No comments:

1947 Israel in color - how many of those shown survived the War of Independence where 1% of the people perished ? Pre-State Israel, in Color
Posted by Tom Carew at 15:58 No comments:

German news on the flotilla to Gaza

Forces behind the *peaceful, humanitarian Gaza aid flotilla*
Posted by Tom Carew at 12:00 No comments:

More from the incomparable LATMA [ *We Con the World* ] team
Posted by Tom Carew at 13:55 No comments:

Obama seriously undermined Egypt by inviting MUSLIM BROTHERS to his Cairo talk - WHY ? Hamas = Brothers palestinian branch. What do Obama, UN and EU think of Hamas ? Are they naive, cowardly appeasers or indifferent ? Israel fears Lebanese ‘fast’ flotilla
Posted by Tom Carew at 14:40 No comments:

Former Spanish Prime Minister: "If Israel Goes Down, We All Go Down"

In The Times [ UK ] Ex-Spanish PM Aznar Former Spanish Prime Minister: "If Israel Goes Down, We All Go Down"
Posted by Tom Carew at 12:49 No comments:

Iranian state goons kick peaceful protester in Dublin - they were possibly also armed
Posted by Tom Carew at 09:02 No comments:

How Iranian *bodyguard* thugs act - even when abroad
Posted by Tom Carew at 17:13 No comments:

The one-eyed marchers or what Lenin called *useful idiots* 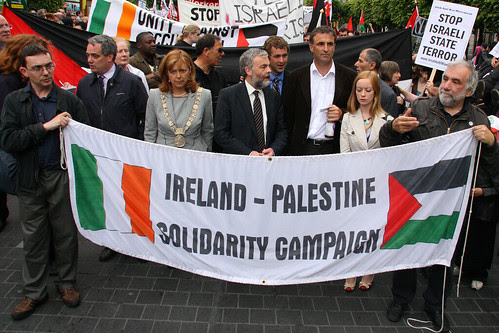 8 faces in front of anti-Israeli march. . Did one of them ever march on the Iranian Embassy in Dublin ? How often did any publicly demand that HAMAS relase Gilad Shalit ?
From left, [ with banner ] sociologist David Landy of Palestine Solidarity who admitted he uses his Jewish background when it is tactically useful - against Israel, Dublin MP O'Snodaigh of *Sinn Fein* [ political wing of the murderous Provo IRA, now allegedly with weapons *de-commissioned* ], Mayor Emer Costello of Labor, bearded Jack O'Connor, SIPTU trade union President, Senator Mark Daly [ dark-blue shirt ] who aims to become an MP and is very good at self-publicity , MP Chris Andrews [ whose seat is very vulnerable and needs publicity ] , Freda Hughes of Palestine Solidarity, as is the bearded Michael Youlton whose parents were English and Greek.

Revealing scenes
Posted by Tom Carew at 16:42 No comments:

LOVE BOAT
Posted by Tom Carew at 16:39 No comments: 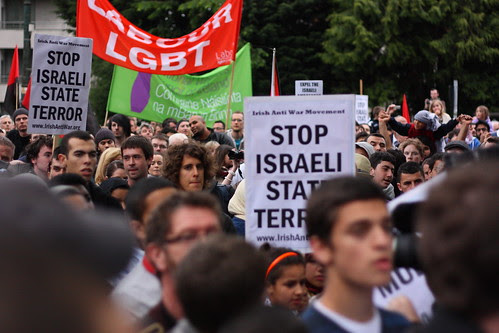 The green banner is National Womens Council of Ireland and the red banner is Labour Party LBGT [ lesbian, gay, bisexual, transgender ] group.
Both Marching with HAMAS. Comment not needed. 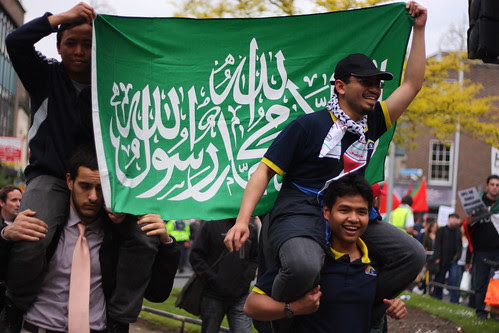 And to which *peaceful, humanitarian, aid workers* group does this flag belong ?
Could this possibly be the *HAMAS World Tour* 2010 ? 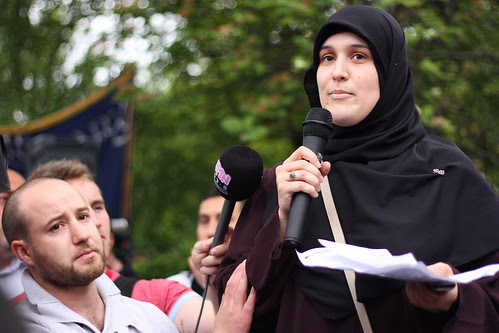 YOUTUBE will NOT succeed in suppressing this
Posted by Tom Carew at 16:10 No comments:

Alleged copyright issues offered as excuse by Youtube YouTube removes ‘We Con the World’ video
Posted by Tom Carew at 15:52 No comments:

What was it again what this is about?

What was it again what this is about?, originally uploaded by xia08.

The renegade *republican* gang in Ireland, the so-called *Real IRA* have a PR/political wing which calls itself *32 County Sovereignty Movement*. The RIRA bombed Omagh in August 1998 -the worst atrocity of the long campaign. They are parading here against Israel - totally logical as they share with Hamas rejection of
[a] Negotiation in principle,
[b] Recognition of neighbors, and
[c] Peace.

Anti-Israeli demonstrators block entrance to Israeli Embassy in Dublin, with yellow Hizb-ALLAH flag at the front 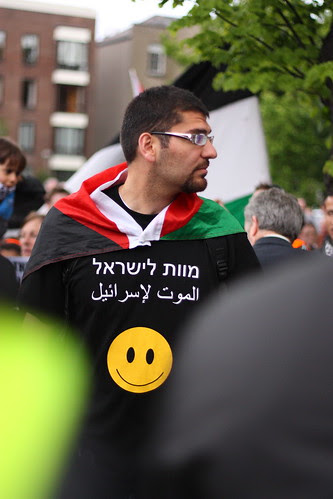 In both Hebrew and Arabic - the real and unchanging Hamas agenda.This was worn in Dublin, Ireland, at the Israeli Embassy. Not pro-palestinian, but anti-Israeli. 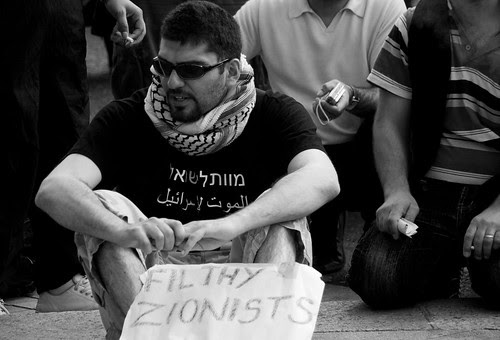 Along with his *Filthy Zionists* placard, his favorite T-Shirt reads *Death to Israel*

Nobel Peace Prize winner, David Trimble is both a former academic lawyer and a former Party Leader whose own party paid a very high electoral price for courageously concluding the Belfast Agreement which provided for cross-community government in Ulster. This panel is much more wide-ranging, balanced and impressively qualified than the UN Goldstone one. N. Irish Nobel laureate, Canadian jurist to observe Gaza flotilla probe - Haaretz Daily Newspaper | Israel News
Posted by Tom Carew at 07:08 No comments:

Islam: We Were Brought up to Hate - Nonie Darwish

Nonie's own father as an Egyptian Colonel, led Fedayeen attacks into Israel and was killed by IDF
Posted by Tom Carew at 13:58 1 comment:

Terror Inc.: Tracing the Dollars Behind the Terror Network

How much will another GAZA flotilla cost ? Who really finds all this ? Light on the hidden economy of terror
Posted by Tom Carew at 10:10 No comments:

The One About Hamas

The One About Iran

Confronting Europe’s War on the Jews

PILAR RAHOLA - A Spanish feminist with a Left perspective Confronting Europe’s War on the Jews
Posted by Tom Carew at 10:33 No comments:

IDF soldiers rescue Hamas terrorists in a collapsing tunnel on the Gaza-...

And who do so-called *peaceful, humanitarian aid wormkers* condemn ?
Posted by Tom Carew at 09:14 No comments:

Gulen and his affluent and influential movement have seemed very close to Erdogan whose sinister agenda is to gradually subvert both Turkey's internal ethos and external alliances, yet Gulen accepts responsibility of IHH agitators in *Marmara* violence Turkish ministers split by Gülen remarks on Gaza flotilla - Hurriyet Daily News and Economic Review
Posted by Tom Carew at 15:30 No comments:

If the *activist* who seized IDF gun really emptied it, as he alleges, who shot 2 IDF members ? Daily Hürriyet publishes photos of bloodied Israeli soldiers - Hurriyet Daily News and Economic Review
Posted by Tom Carew at 15:18 No comments:

Shows clearly how long IDF waited until under fire before finally reacting in self-defence
Posted by Tom Carew at 00:22 1 comment:

In their own words - and as shown on AL JAZEERA - these *peace-loving, humanitarian aid convoy workers*
Posted by Tom Carew at 09:14 No comments:

MEMRI TV Clips on the Gaza Flotilla: Activists On Board Chant Songs of Martyrdom at Departure

The true fanatical Jihadi face of the Gaza *peaceful humanitarian aid convoy* unmasked MEMRI TV Clips on the Gaza Flotilla: Activists On Board Chant Songs of Martyrdom at Departure
Posted by Tom Carew at 04:38 No comments:

What should police or troops do - from any land - when stabbed and heavily outnumbered by savage attackers ?
Posted by Tom Carew at 03:36 No comments: