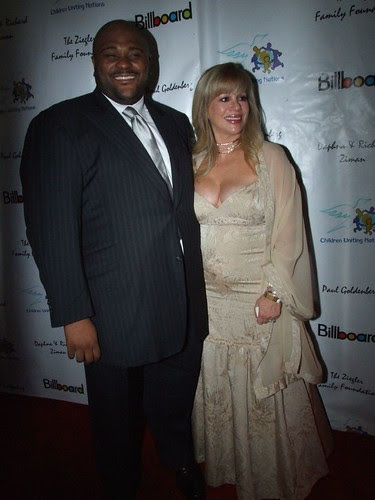 Daphna Edwards Ziman is an Israeli-born, LA producer [ Edwards Entertainment Intl ], philanthropist and founder and volunteer Chair of CUN [ Children Uniting Nations ] which recruits caring adults as mentors for inner-city children-at-risk. She found that the virulent anti-semitic diatribe is not confined to Obama's pastor and close friend of 2 decades, Rev Jeremiah **God damn America** Wright, in Trinity United Church of Christ in Chicago. Another African-American clergyman, Rev Eric P. Lee, who also just happens to be Greater LA CEO/President of SCLC [ Southern Christian Leadership Conference - founded in 1957 by Rev Dr. Martin Luther King ], delivered another such bigoted and racist attack - as keynote speaker at an awards ceremony [by Kappa Alpha Psi fraternity ] which honored Daphna for her work for African-American children. Lee, instead of taking responsibility for reducing the serious crime rates within his own constituency, blamed yes the Jews [the eternal scapegoats ] for the bad image of his own community - **as rapists and murderers**. And blamed Jews for exploiting them - **economically enslaving them** - in the music business.

When slavery was abolished in the USA, and for many decades afterwards, the ancestors of most Amercian Jews were still suffering savage pogroms in many parts of the Tzarist Russian Empire. Their good fortune in the USA today is the result of hard work and talent - over many generations. And the life of Daphna Ziman is one more example of how the Jewish people have never lost their burning sense of social concern and activism. In the USA they do not even vote their pocket- they still vote Democrat to the order of perhaps 80% or more. That social commitment has also been global - with Jewish voices among the loudest in defending the non-Arab people of Darfur in SW Sudan as they face ongoing genocide - perhaps 200,000 massacred todate - and was also expressed in the crucial role of Jewish activists in Trade Unions, and in so many movements for political and social reform. Even if such racist stereotyping were not totally unjustifiable, and also an incitement to hatred, the last category against whom global charges of exploitation could conceivably be levelled would be the Jewish people.

Could Lee's motivation in his attack have been at all colored by his own endorsement of Obama [on the night Lee thanked Jesus for Obama who was going to be the leader of the world, as well as referring to **white supremacy**, and lauding Malcolm X immediately after mentioning Dr King - as if they were not polar opposites ] ? Daphna happens to be a strong and public supporter of Senator Clinton.

Whatever about any such angle, it is seriously disturbing that figures like Wright and Lee are preaching black racism and anti-semitism, as well as spewing hatred for their own country [ Lee, echoing Wright, demeaned being granted freedom in a country which **kills women and children** ]. But perhaps not so surprising when you recall Wright's admiration for the anti-Semitic Louis Farrakhan, or Lee's invocation of Malcolm X. It is even more concerning that people with this mentality regard Obama as so worthy of their enthusiastic support - but then he sat silently for 20 years in Wright's church, and never objected to any of the outlandish and indeed outrageous sermons.

No wonder so many Democrats already state they will vote for Senator John S. McCain if faced with Obama as the Democratic nominee this year.

Can anyone seriously doubt that Dr. King would have abandoned his principles and embraced a racist **black power** ideology which is in essence opposed to his commitment to universal human rights, and substitutes racial identity for human solidarity ? The contrast between the PAC [ Pan-African Congress ] in South Africa, with their vile **one settler, one bullet** slogan, and Nelson Mandela, could not have been greater. In both cases, the issue is about equal rights and equal opportunity, not about separation or identity or power, based on color. The land where Dr. Condi Rice is Secretary of State, and was formerly Princeton Provost, and where her Cabinet predecessor was Gen Colin Powell, and formerly Chair of the Joint Chiefs-of-Staff, is no land of **white supremacy**, but as with the tyrant Mugabe in Zimbabwe, scapegoats are often useful.

And casting the Jewish people in that role did not begin or end with Hitler.

**And some who have just returned from the border say:

there are no barbarians any longer.

And now, what's going to happen to us without barbarians ?

They were, those people, a kind of solution**.

**And some who have just returned from the border say:

there are no barbarians any longer.

And now, what's going to happen to us without barbarians ?

They were, those people, a kind of solution**.

And now we have a new problem, Tom--our leaders cannot see any barbarians, even as they pillage and kidnap and torture and bomb and behead civilians, even children...Oh, but they've learned ONE peaceful skill from the civilized world: filing an anti-discrimination lawsuit.